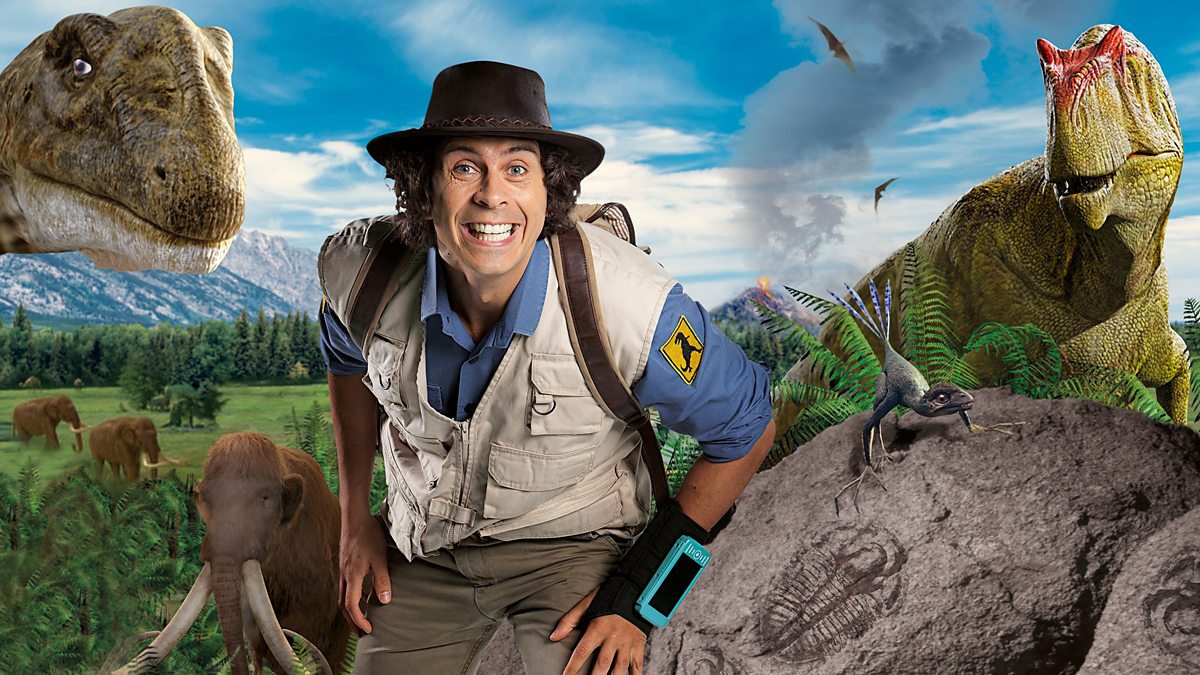 One of the joys of being a parent is you get to watch a lot of kids’s TV. A LOT.  Part of this, especially when you view the episodes repeatedly, or at odd parts of the day when things seem even more surreal (e.g. 3AM), is you get to really know the program. For example, I’ve got a theory I’d love to write about some time about how In The Night Garden is about death and the process of transition to the afterlife, along with the classic fight of good/evil, based on biblical colour symbolism.

But for now, let’s turn our attention to the (basically identical) programmes that are “Andy’s Dinosaur Adventures” and “Andy’s Prehistoric Adventures“. I’m writing this with the assumption you’re a fellow parent who’s familiar with the series. If you’re not, I in no way recommend you watch this program.
With that said, here’s various thoughts and questions I have about it:

Observe – this isn’t normal. And it’s not something I’d expect from a museum worker.I have nothing to base that assumption on, it’s just not something I’d associate them with.  Apparently, the average assistant curator wage is £18-£25k and the guy works in London so I’m unsure how he can afford a teeth-whitening regime plus the normal costs of living in the capital. (Noting that the latter series shows him to have been promoted, so he could be on £35k in fairness – but even then).

#2 – Why does he never know what’s in his rucksack?

He stores HIS bag in HIS locker in HIS workplace. Yet whenever he travels back in time and goes to retrieve something that might help him, he never knows what’s inside it. One episode I watched the other day he had a whole pineapple in there and yet was (or so we’re led to believe) completely unaware of this fact.
Something doesn’t add up here. Possibilities – he’s lying about not knowing what’s in it; a colleague regularly pranks him by emptying it and replacing it with random objects; it’s not actually his rucksack; he is seriously mentally ill. Either way, the plot hole is really annoying to the point I get physically tense.

Whenever Mrs Pickles is returning to check on the exhibit Andy & crew are working on, it’s always the same shot of her walking through the hall. This annoys me. As does her stupid ‘Mona Lisa’ style smile. And her walk. And her demeanour.

Who created Andy’s ‘gizmo’? Was it the military, or some kind of wacky ‘eccentric’ professor like Doc Brown in Back To The Future? How did Andy get trained up on how to use it? And why doesn’t anyone else know about it?

Why hasn’t the museum cleaner been sacked? Pretty much every bloody episode starts with Andy going on about how some exhibit is nearly ready, whilst the cleaner guy ‘bumbles’ in the background nearby. We all know he’s going to slip up or knock something down. It’s like the old episodes of Casualty where it’s start with some guy climbing up a precarious ladder in the first scene, saying “I’ll be OK love – you go on out” to his wife.
Seriously though, the cleaner is inept – for all the damage he’s done, he should have been up on a disciplinary charge. I’m assuming it’s outsourced but someone really should  talk to the contractors and get him out, pronto.

I appreciate this is an issue for any time travel film or program – however – when he travels back in time – why does he never appear in or between objects? Like, why does it just happen that he appears in the middle of nowhere, rather than, say, a rock (and instantly dying, which of course would ruin the show)?

Can’t find the link but someone raised a damn good point on Twitter – basically how Andy is master of overkill. He messes something up – rather than going back in time a few minutes to remedy the situation, he goes back millions of years. Again, I realise the show would be boring if he did the former, but it hardly adds to any sense of realism.

It makes HUGE light effects and sound – why does literally NO-ONE ever see or hear it? Ever? I know the museum is shut but we know Jen, Mrs Pickles and the cleaner are in the building. Probably another cleaner or two (possibly ones who can, like, do their job properly), and maybe some IT peeps too. So how does no-one ever not notice it?

Why does it only work for Andy? Given all the thousands of people who walk past it each day when the museum is open, why does no-one else ‘trigger’ it to do the time-travelling shiz?

How did he ever find out the clock was a time machine? Let’s say one day it was doing all the light/sound BS – how did he think “ah – I see – it’ s a time machine” and go along with it? I’d shit myself.

Why does she never get suspicious about how Andy fixes all these things after having suspiciously run off?

How does him bringing soil/rocks/whatever back from millions of years ago not create some odd glitch in the space-time continuum? Great Scott!

What would Andy do if the clock was stolen/trashed/removed by the museum? He’d then be basically screwed as he would actually have to honestly address the constant mistakes him, Hatty/Jen and the useless cleaner makes.

Does it only take him back to millions of years ago? If so, what a crap time machine. This seems to be confirmed through the lyrics to the theme song: “The Old Museum Clock takes me back in time to when Dinosaurs ruled the world.” (Note also the ‘me’ not ‘anyone’)

How do the controls work, and how did he figure them out?

Why do the batteries never run out? Why does he never find himself searching his backpack for a portable USB charger?

Does he have a partner? If so, does Andy ever tell them he’s time-travelled? If not, how does he keep it secret? I’d be gagging to spill the beans if I’d time travelled.

Andy IS the cleaner but is severaly mentally ill. Everything we see in the episode is his horrible hallucinations.

Andy is dead and this is the afterlife.

A-la Fight Club, he is the cleaner and Andy the time-travelling museum worker is his alter-ego.