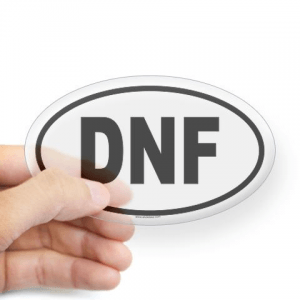 So you DNFd (Did Not Finish) an ultra marathon did you? You put all that time and effort into training and you failed. Here are ten reasons you suck:

The Truth About DNFing

There is nothing lame, weak, wrong, pathetic, or crap about not finishing an ultra marathon. Nothing. It happens to every level of runner from elite to back of pack. The longer the race, the more likely it is. For example, with Centurion 100 milers the DNF rate is about 1 in 3. There is so much that can happen or go wrong in an ultra that DNFs are a natural part of the sport, whether you like it or not.

How To Deal With A DNF

Whatever the reason you had to pull out early in the race, one thing’s for sure – you’ll be very dissapointed, especially if it’s late into the race (e.g. 85 miles into a 100 miler). You may also feel upset, guilty, down on yourself, angry, bitter, disillusioned, fed up, depressed or dejected. Or a mix of these feelings. That’s perfectly natural.

It’s a horrible feeling having to DNF for a race you’ve probably spent countless hours and miles training for, only to feel you’re walking (or hobbling!) away with nothing – no medal, no t-shirt, no finish line photo, no glory, no feeling of achievement.

One of the keys to dealing with a DNF of an event is to not allow yourself to wallow in that misery. Sure, allow yourself to feel all the negative stuff – don’t fight it – but at most for a day. Here’s what I think are the key factors in recovering from a DNF:

It’s happened. You DNFd. You can not change that, no matter how much you want to. Accept it and move on.

You gain nothing by holding on to the negative emotions about it. Let yourself have a cry/moan/whinge/pity party/guilt trip/food binge/day in bed, then move on.

Learn from it. You need to (whilst it’s fresh in your head) objectively evaluate what happened, work out what went wrong, and what you could have done (or not done) differently.
Obviously if your DNF was purely down to bad luck (tripped and broke a leg for example) then there’s nothing you can learn from it.
But in the majority of cases, it comes down to factors like pace (e.g. going out too quickly), nutrition (the food/fuel you’re using doesn’t work for you and your stomach), hydration (you didn’t drink enough), electrolytes (didn’t get enough in), or walk breaks (didn’t do enough). There is also the ‘mental game’ factors where you basically convinced yourself you were done, even though you still had it in you to finish.

Go through the race, ask yourself (and others, for a truly objective perspective) what you think caused the DNF. Learn from it, and ensure you put the learnings into use in your next race.
Doing so a) gives you something positive and constructive to come out of the DNF and b) increases your chances of completing the next event (oh yes, there will be another!).

It’s so easy to blame external factors when you DNF. At TP100 2016 last year, I nearly dropped at 85 miles. My reasons at the time were all nothing to do with me, e.g. “it’s just not my day” (meaningless), “I can’t keep food down” (my own fault for not eating properly early on, “I’m down to just walking now” (duh, it’s a 100 miler, this happens), “I just can’t do this” (yes you can)……..anything and everything but accept the truth, which was that in the first 50 miles, I simply didn’t follow my race plan. That doesn’t make me a bad person but it does mean the responsibility of it fell on me (luckily I got talked out of dropping and carried on to get my buckle).

It’s not pleasant saying “it was my fault/responsibility”. It’s easier to go “it was the weather”, “the course was tougher than I thought”, “it wasn’t meant to be” and crap like that. But it’s a) not true and b) doesn’t help you.

Own it but be objective. You don’t need to beat yourself up about it or feel like a loser. Just realise that it’s on you to train, to start the race, to do the race and finish it. Just you.

#6 Get Positive And Focus On The Next Event

Now your toys are back in the pram and you’ve worked out what went wrong, it’s time to focus on the next event – either one you already have booked, or one you’re about to. Get buzzed, get excited and get back into training. Realise that despite of your DNF, you’re still awesome and you will smash it on the next one. Chin up and enjoy the trails!