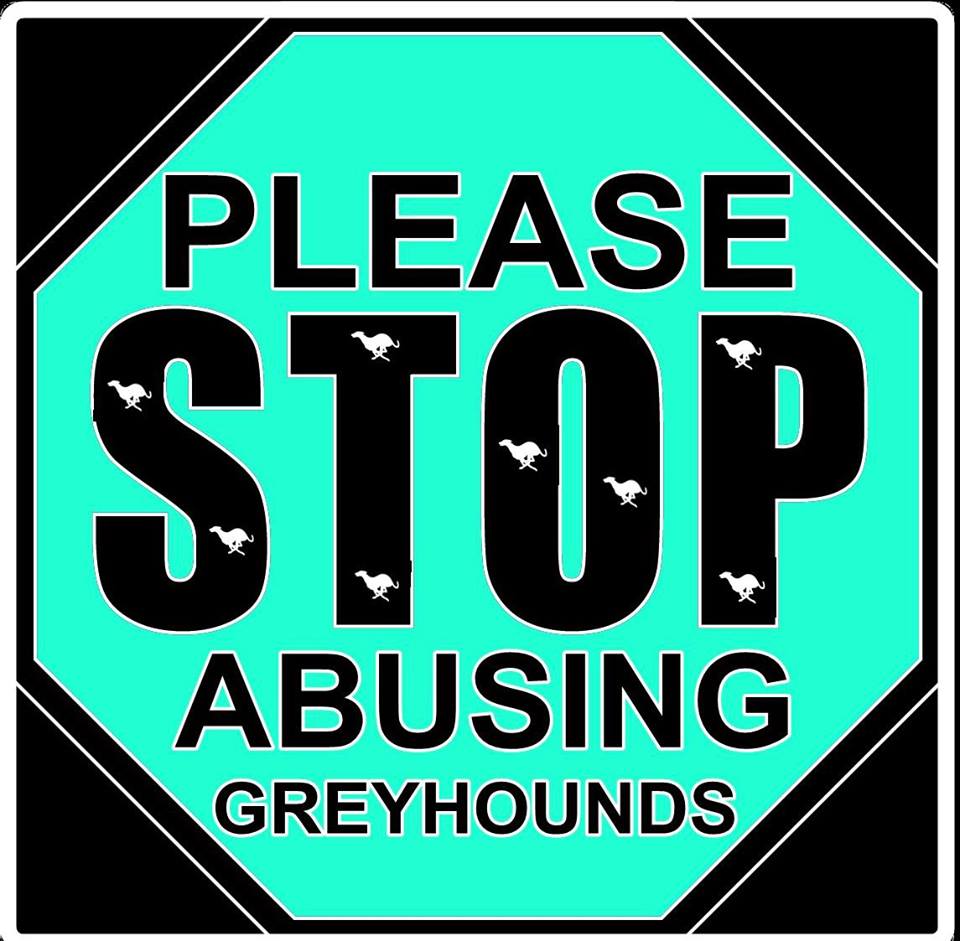 I do not, and will not, ever support or condone greyhound racing. There, I said it.

“Oh, but you’re a greyhound owner, you must love to see them running?”

“Oh, but they’re so happy when they run”

Right. I’ve been meaning to write about this for a while – it’s a subject I’m very strongly opinionated about and one that’s very emotive to me as I’ve had greyhounds in my life for nearly eight years now.

Before I carry on and slate the greyhound industry, let me say that I do understand why going to see dogs racing would be fun, for, I’m guessing, the following reasons:

2) It makes for a fun night out /social occasion.

3) The fun is added to with the ability to bet on the outcome of the races (and therefore give a buzz from the potential win).

However, none of that makes up for the disgrace that is dog racing.

Go on then, slate the industry

The overall factor for me is that the greyhound industry isn’t about the dogs, it’s not about their health, their happiness, their lives – it’s about them being used as a commodity for the financial gain of the trainers, owners, tracks, and betting operators. Nothing more, nothing less. The dogs serve a purpose, they are stock, means to an end, and if/when they’re no longer causing financial gain, that stock is discarded without remorse or regard for morality, ethics or cruelty.

So what precisely is cruel about the life of a greyhound in the industry? Well, in no particular order:

Greyhounds are given tattoos either in both ears or just one, effectively a serial number. This is cruel to say the least – how can you justify subjecting an animal to that? You can’t, it’s disgusting.

You’re no good for me 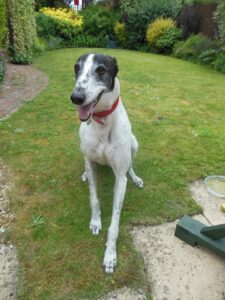 This is my boy Billy. He’s around five now -he’s one of the most loving, affectionate animals I’ve ever met. He’s loyal, sensitive, fun loving and gentle. However, he wasn’t good enough to race (if you’d see him run you’d see why!) – which meant he was kicked out by his trainer as he was of no use (financial gain). As was his sister. Both dogs were destined to be put down but thankfully found homes.

I can’t support an industry that treats animals like this – make no mistake, the trainers/owners etc have no qualms about slaughtering any dog deemed not good enough. Don’t kid yourself they care or have remorse or emotion about it. They don’t.

So this is one end of the process – damned if they do, damned if they don’t. Good enough to race? Look forward to a couple of years of being used for financial gain before being turfed out. Not good enough? Don’t care, get out – get put down or maybe get a home.

This isn’t the process of anyone who cares about greyhounds. It’s not caring, it’s not love, it’s not respect. It’s greed, lack of compassion and selfishness. This isn’t about the interests of the dogs, it’s about making money. If you visit a greyhound race, your entrance fee and wagers support this cruelty. And if you want to support it, then your morals aren’t quite right, in my opinion.

We’re done with you

So, a greyhound that’s good enough to race gets used for a couple of years – probably kept in a crate most of the time, ‘trained’ at the trainers whim, given no ‘puppyhood’, possibly drugged for better/worse performance. They might make the trainer et al a load of money, they might not.

At the end of this process, there is no use for them (with the exception of some male dogs who are deemed such good ‘stock’ that they are used for breeding or extracting semen from). So they’re turfed out. By the hundreds. Some of them find homes, some sit in kennels for years, many are put down. Figures of how many are put down vary and are hard to prove but are estimated to be between 500 and 1000 in the UK alone per year.

Many of the scumbag trainers/owners don’t even want to pay to have the dog put down ‘humanely’, and pay another scumbag to shoot them, or perhaps just drown them personally. Let me stress, these people do NOT care about the greyhound. They don’t love them, this is about money, greed and awful ethics. 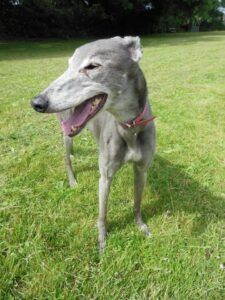 The beautiful greyhound in the picture is my girl Misty. Misty has just celebrated her 12th birthday. She’s a very quiet, gentle, laidback yet assertive dog who is loved by children and adults alike. She was a reasonably good racer but of course once her racing ‘career’ was over she was kicked out. She’s one of the lucky ones – she’s had a great life since then and at the moment as I write this is hogging the bed, enjoying her retirement. I can’t imagine for a moment how you can have such a lack of emotion and compassion that you could just take a beautiful animal like this and murder them, just because they wouldn’t be making you money any more. How empty do you have to be as a person to do that? And how can you justify financially contributing to an industry that does this?

Somewhat naively, I didn’t know about this cruel and disgusting element of the industry until recently. I had been researching Misty’s ‘family tree’ – turns out her Dad was somewhat of a greyhound celebrity way back and when. He was put down when he was 10.

So the score is, they use the really good males to harvest semen from, which they can then sell to people wanting to breed from good ‘stock’. Check out this range of greyhound sperm that you can buy. This is just disgusting – I’m no fan of making dogs breed for this industry anyway, but to use artificial insemination methods is just cruel and nasty.

Again, every penny of your money that you put towards this industry supports this crap. And it will until you stop.

But they enjoy racing!

I would never dispute that a greyhound enjoys/loves running. However, the racing industry is about them running when they HAVE to – for a race. Not out of joy or fun or because they want to.

To see a greyhound running for the sheer joy of it is one of the most beautiful things in the world. It’s stunning to watch, especially if you have two or more running as a pack/playing/’racing’.

In any case, the race itself is a tiny, tiny part of their time. Let’s not forget the majority of the time they won’t be doing that, and they won’t be having fun.

A simple Google search will enable to easily find the sheer cruelty of this industry. There’s loads of images or videos I could insert here. Have a read of

Which gives some background about the scale of the problem in the USA. It’s huge.

Thankfully, this messed up, greedy, cruel industry is fading, as the BBC reported in January 2013. I’d love to think this is because people are more savvy about the sick industry however it’s more likely to be a sign of the economy – people having less money to spend ‘out’ etc. But either way, the decline is a good thing. I don’t sympathise with anyone that may have lost a job due to this, not one bit.

Retired greyhounds and why they rock

Greyhounds are awesome companions. They’re relaxing to have around (as they love sleep), they’re loyal, kind, great with kids, and loving. I’ve had (including the two now) four greyhounds in my life and I wouldn’t consider another breed now. Not because I dislike other breeds, but once you’ve experienced life with a greyhound you won’t look back.

You can help these dogs by

1) Not contributing towards this industry

2) Considering taking in a retired greyhound to your life and give it a loving retirement that it deserves, away from the crap of their previous life. Show them what love is, let them grow and enjoy the bonding and mutual love  for the rest of their lives.