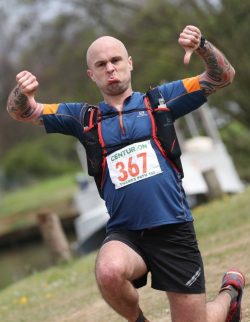 Ultra marathons (any running distance above the standard 26.2 marathon), are something I truly love. I made the switch from doing more traditional road races at half or marathon distance a few years ago and I’ve never looked back.
Ultras aren’t easy – they’re not meant to be, that’s the point in them. They take hours and hours of training, then of course the physical and mental work of the race themselves.

During my races, I’ve learned that ultras do an amazing job of breaking you down to the core of who you are. That may sound brutal and a bit philosophical, but when you’ve been on your feet for 85 miles and your entire body and mind is screaming at you to quit, and you know you have hours left to go, it’s what happens.

Not only have ultras really shown me the ‘real’ me, but some of them have taught me really valuable lessons, and that’s what I’m going to talk about today. So let’s start:

In any ultra I’ve done, regardless of whether it went great, bad, or I finished or not, I’ve felt a huge sense of gratitude. You may ask yourself why I feel grateful putting myself through such events. I guess it boils down to three things.

Firstly, I’m grateful that I’m physically able to run. I’m healthy, all my limbs work, I’ve been lucky in my life. Knowing I can get out the door after work and run, or do a long run at the weekend, or of course racing, isn’t something I take for granted. My Dad (who passed in 2008) was someone who was healthy and able bodied. He loved hiking. When he was diagnosed with MND it seemed so unfair and crazy that would happen to someone healthy and fit. Seeing all that taught me never to take our bodies and health for granted.

Secondly, I get grateful for being able to run around the beautiful countryside (OK that doesn’t apply to the Thames Path leading up to Reading, or the canal section of C2C!), in different weathers and different times of the day.
One ‘ultra memory’ that will always stick with me is overnight of Autumn 100, along the ridgeway on a clear night, a nearly full moon and being able to turn headlamp off. A runner near me said “we’re so bloody lucky aren’t we?”. Or during SDW100, walking up a huge hill in late evening, then seeing a fireworks display in the distance.

Finally, I’m grateful for the fact I’m here. As someone who’s bipolar and suffered mental health issues all their life, I’m glad I never took my life and that I’m still in this world. Each time I do an ultra (and especially the two 100 milers I’ve done), it’s like a big ‘screw you’ to depression!

As someone who hasn’t got tons of self-esteem, being able to genuinely feel proud about something or go “yep, that was me, I did something amazing!” doesn’t come naturally or easily to me. I’m very prone to writing things off as luck, fluke or apportion things to someone else.

However, in the case of ultras that I’ve finished, I can’t do that, because the proof is there in the finishing time, the medal, the photo and all the work that went into it. I’m not really one for keeping medals on display but the exception is my two 100 mile buckles which are always on display in my office. They’re a reminder that I’ve done amazing things and that I 100% deserve to be proud of them.

I’m proud not only of the ultras I finished, but also the ones I didn’t. I’m proud that I learn things, that I can be self-critical of things I didn’t do so well. And I’m proud of all the thousands of miles I ran in training.
And I love knowing that nothing I or anyone else does, or anything that happens in my life, can change the fact I did these.

It probably won’t surprise anyone to know that to complete an ultra of any distance you have to be pretty damned determined. And you have to be determined before that, to put the countless hours and miles of training in.

Ultras have not just taught me this, but taught me how amazing it feels to know you’ve called up on your determination and seen things through to the end. Not giving up when things are insanely tough, keeping going when every fibre of your being is telling you to stop… there’s a big lesson there for life in general, not just ultras.

One race that springs to mind for this is the first time I did the Centurion Autumn 100. I’d trained, tapered and planned really well. The first half went great – 50 miles done in 9hrs 40mins, nice steady pacing, felt great. Not long after that though I took a downhill section way, way too fast and aggressively, and injured the tops of both my quads. Whilst I could still move, I couldn’t (without a lot of pain) raise my legs high enough to run. Well, I knew instantly my plans of a sub 24 hour 100 had gone – but I also knew I could walk/hike the race in and still complete it.
Which I did, even though the last 50 miles took my over 17 hours.
What I took from this was that if you make a decision to keep going at something, even though you know damn well it’s going to be hard, painful and even boring, you can finish it and be proud of what you’ve done.

The more you do things like that (and I don’t mean ultras, I mean anything in your life that’s worthwhile but takes grit, hard work and determination to get), the stronger you become as a person.

When things go wrong in any area of your life, it’s easy to blame other people, other events, other things – anything but yourself. It takes the pressure of you and means when things don’t go well you can say “it wasn’t my fault!”. It’s easy, yes, but it’s lame.

When you’re running an ultra, it’s on you. You do the training, you get your ass out of the door when it’s raining/snowing/cold/boiling hot. You decide and commit to do a race. You prep, you taper, You get yourself on the starting line. And you run the race, and you finish it. You.

My first 100 miler (Centurion Thames Path) didn’t go to plan. Why didn’t it go to plan? Because I didn’t follow my own plan! Simple, basic stuff like eating every X minutes and drinking every X minutes. Simple, basic stuff like taking an S-Cap every hour. Basic, easy stuff right? Well I didn’t do the basics and unsurprisingly, my race fell apart.
I near enough crawled in to the half way point, feeling actually faint from low blood sugar. I struggled to keep food down from then on, due to low electrolyte levels.

I opened up my half way drop bag to find just a crazy amount of stuff. Food, cables, chargers, more food. I’d over done it and just ended up confused and annoyed.

I did end up finishing the race (thankyou Dan!) but not before a lot of me blaming anything but me. This included:

Of course, none of this was valid. The only thing to blame was me not following my own simple race plan.

Now I’m not saying this to beat myself up about it. My point is that the events in the race, once I’d reflected on them, made me realise how much I blame other things in my life when really it’s on me. Work, personal – everything. Running an ultra where you’re dependent on your own preparation, fitness, mind, strength and courage brings that home to you.

It’s easy in life when we’re doing something we’ve done before, or know a lot about, to either go on autopilot, or to just get complacent. Complacency has cost me two 100 mile finishes, and has meant I still haven’t hit a big goal of mine, doing a sub 24 hour 100 miler.

Autumn 100 – my second go.. I’d completed the course before, I was in good shape. Again I did the first half in under ten hours, I felt great and I had 14 hours left to do the next 50 miles. Physically and mentally I felt great.
In the third party of the race, I took a wrong turning. Navigation in A100 is damn easy so this is quite embarrassing. Long story short, I ended up walking around in circles in the early hours of the morning, clocking up extra hours and miles.
Why? Because I had never bothered to put the GPX file on my phone before the race. If I had, I would have been able to work my way out of it quicker.

The second time complacency ruined a race was SDW100, my second try. Bear in mind this race happens in the summer, and you’re running all day in the sun (obviously). You would think that an experienced runner getting ready for the race would take in his race pack a cap and some sunblock, wouldn’t you?
Well, I didn’t. When I was getting my kit ready on the day I thought (at 5 am), it’s not too hot today, I won’t need it.
You can guess what happened – I baked (as someone with a shaved head this is very easy). My race blew up about 40 miles in and all the cold water in the world thrown on my head couldn’t fix it.

Being complacent in any area of our lives puts us at risk of under-performing or not performing at all. Taking the little bit of extra time or thought into things (and not making assumptions) minimises it. All that time, effort and cost of the race and I blew it by not taking two items with me. Insane!

For me, ultra marathons are part of my life and who I am. They have a clear parallel to bipolar disorder (think, the highs of running and finishing versus the lows of DNFs or crawling your way to the end of a 100 miler). As I said earlier, they will break you down to the core of you are, to a point where you can’t hide from it.
They teach you things about yourself – not just as a runner, but as a person. As a parent, child, sibling, friend, colleague or leader.
Sometimes the things are great, sometimes they’re stuff you don’t want to think about. But in ultras you can’t hide from them. The lessons endurance running have (and will) give me are invaluable – one of the many reasons I love ultras!