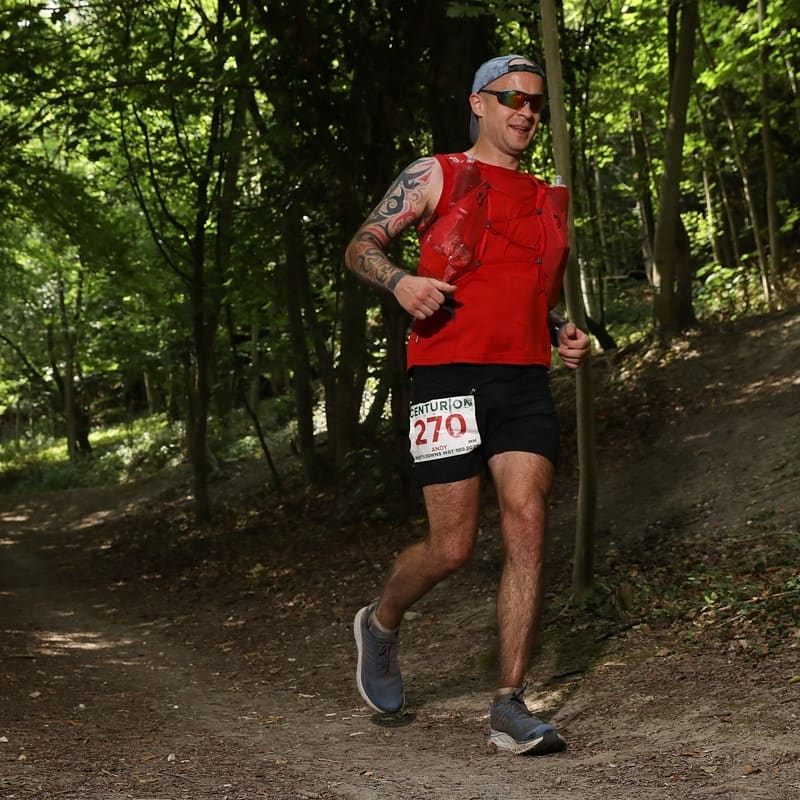 It’s around 3am on a warm summer’s night. I’m laid looking up at the stars, with the occasional blinking light of a plane meandering over the sky. It’s not often we get to take time to appreciate the beauty of the sky and how it makes us realise how tiny we are in the big picture of the wondrous universe..

I’m laid on a bit of grass by the Julie Rose Stadium in Ashford, Kent. I’m covered in a foil blanket. Despite the warmth of the summer’s night, I’m fairly cold and have donned a waterproof jacket. I’m covered in sweat, puke and dirt having run 50 miles earlier on the hottest day of the year.
A few metres away from me a fellow NDW100 runner noisily retches his guts out. The first train from Ashford isn’t for another 2.5 hours. I turn my gaze back to the stars and reflect on how I got here.

This wasn’t my first rodeo. It was the ninth time I started a 100 miler and, had I not DNFd, been my fourth finish.
I’ve done the Centurion North Downs Way 100 course twice before – once finish (last year), once DNFd (2017 I think).

Also it’s worth mentioning that I HATE running in the heat. My body isn’t cut out for it and I struggle getting in enough electrolytes at the best of times. So as the predicted temperatures went up and up in the week before the race, I was quite nervous to say the least. However, most of all I was just super excited and felt blessed that the event was happening at all, given how many had been cancelled this year.

First Time On A Train Since March

The journey up to Farnham was interesting. I hadn’t been on a train since pre-lockdown so the experience of wearing a mask, seeing all of the social distancing signage etc., was surreal.

Got to my hotel with plenty of time to chill, get my gear sorted and relax. I actually had a good night’s sleep which isn’t easy to do the night before a big race!

This year, due to Covid, James and the Centurion team had worked really hard to ensure the event ran. Part of this involved a ‘rolling start’ (i.e. you could start anytime between 5-7am) and also having your temperature checked at the start.

I actually preferred this to ‘normal’ ultra marathon starts – less nervous energy around you, no worrying about rocking up late – I’m a big fan! The temperature was pleasantly warm when I started around 0520).

The first few miles of an ultra marathon are, for me, a mix of getting a feel of how I’m feeling that day, warming up (both physically and mentally), and generally getting into a nice easy groove. As the sun came up we were treated to a beautiful day on the Downs, with some stunning countryside and views to enjoy.
Additionally, a huge feeling of being blessed to be able to do a race, given how many had been cancelled this year. Here’s me a few miles into the NDW 2020:

My aim in the fist 20 miles or so was to a) take it really chilled out (had to catch myself a few times and really dial back the effort) but also b) hoping to do around four hours. Which I did:

Me in the earlyish bit of the North Downs Way, still smiling (photo by Stuart March, purchased):

In the weeks and days leading up to the NDW 100 race, the weather forecast showed it was going to be hot. Then hotter. Then hotter still. Late morning once the sun had broken through and a lot of the under-cover areas of the North Downs were over, it became apparent this was going to be quite unpleasant to race in, especially as I’m not great in the heat anyway.

At this point I was still eating and getting electrolytes in OK so despite my glum expression here it wasn’t awful. Yet.

The heat increased throughout the day, peaking at 33-34c in mid afternoon. I don’t think I’ve ever run in such high temperature, let alone raced in it. It was just brutal and sapping. The photo below doesn’t do the heat justice, but imagine a baking hot day with no wind, and the heat reflecting back off the chalky surface of the North Downs:

See this hill below? Hard to tell from the angle how steep it is. I f*cking hate this hill. Did I mention the temperature was 34c?

Miles 30-40 was when it really sunk in how hard today was going to be. I experienced tingling in my lips and fingers, which I’ve not had before, presumably due to mild heatstroke. As I had no crew, I had no access to ice or cold water to pour down me to lower my temperature. I found it increasingly harder to regulate my body temperature or heart rate. I then found it progressively more difficult to get food in, or electrolytes. So I was running on empty, feeling exhausted from the heat, with electrolyte levels all imbalanced.

Cutting a long story short, in the mid-late 40 miles, the heat really got to me. I wasn’t eating, and my electrolytes were all over the place. After spewing into a field so hard I briefly fainted (thankfully there was another runner there who stopped to check on me – THANKYOU SIR!!), I knew I was done.
I death-marched into Knockcholt, took a trip to the village shop, procured two Calippos, tons of cold drink, some crisps, then went and pulled out at Knockholt. Whilst Dan Park did try his best to banter me into not quitting (nice try mate), I knew I was spent.

I was a bit all over the place so they had the race medic check me over. His thoughts was it was dehydration. Apparently my blood pressure etc was fine. After a few sweet teas and some food, I felt tons better as my blood sugar level returned. But again I knew this wasn’t a day to push it and I had no intention of going out there and deathmarching the remaining 53 miles.

Here’s me with an ECG on (and very muddy legs!):

Whilst I didn’t get a buckle or a tshirt, for my troubles at the North Downs Way 100 I got this rather cool ECG printout from the race medic. Sadly there was no printout for ‘overly hot, dehydrated, hungry, tired and pissed off’.

As I sat there, quite a few others came in and DNFd. The day had been brutal to all of us. I commend anyone who finished, the conditions were super tough for a course that is challenging even in normal weather.

The drive in the ‘DNF Bus’ minibus over to Ashford was long (especially as the driver went most of the way to the wrong Ashford LOL), but it was nice to just be sat down.

Laying on the ground outside the stadium later it was bittersweet hearing other runners finish. But overall I felt blessed that I’d been able to do an event at all, and also of my good health and situation.

James and the Centurion crew are truly amazing. The volunteers at all the NDW 100 aid stations were absolute superstars – it really is like a big family – a true sense of community where everyone genuinely wants to help each other. Blessed.

Where Do We Go From Here?

“I get knocked down, I get up again,” ‘sung’ the God-awful Chumbawamba in their insufferably awful 90s hit ‘TubThumping’. Well, I’m down but not out. I’m still 100% focussed and set on doing a sub-24 hour 100 miler and I will do this in October at the Cenbturion Autumn 100. It’s a faster course (less elevation, less miles – 100 v 103), will be cooler, and all in all plays to my strengths as a runner. I refuse to be knocked back properly by a DNF (Did Not Fail), especially given the heat. Let’s do this!