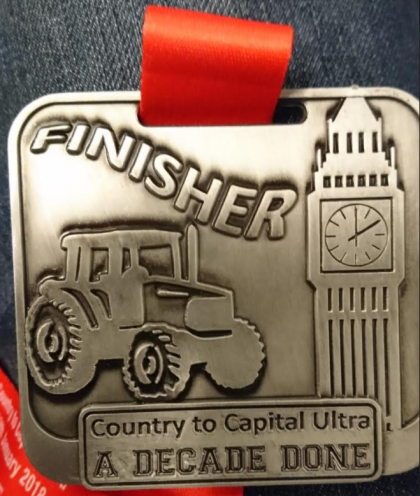 AKA When A Race Goes Great

After DNFing A100 in October, I fancied getting an ultra in early into 2018 and entered for C2C. Whilst January isn’t the best of weather for racing, it does force you to keep your training and fitness going through Christmas and not becoming a fat bastard.

About Country To Capital Ultra

C2C is billed as a 45 miler but in reality is 43 miles or so. The first half of the race is trail, starting in Wendover (not far from Aylesbury) and the second half on the canal (ending in Paddington).
For some reason, the course isn’t marked. For the second half, this doesn’t matter, but for the first it does. The organisers give out paper maps, and you can use sat=nav/GPX, however I think it’s rather silly not marking it. I’d quite happily pay another £2 on top of the entrance fee for it. I don’t see why not marking a course at all is a positive thing – IMO it doesn’t make it ‘cool’ or ‘hardcore’, it’s just annoying. Anyways.

C2C would be a great ultra for a first timer. 43 miles is a challenge but not as huge as a 100k. Also the mix of trail and flat would be good.

After a shit year racing in 2017, with some DNFs, I wanted to kick the year off strongly. This was also on the back of us losing one of our dogs a week ago, so emotionally I wasn’t in a good place. I needed this to clear my head, race well, and regain confidence for the coming year.
I was aiming for 7 hours again, but more importantly to feel strong, in control and pace well. Oh, and not to puke, shit myself or pass out. Aim high.

Stayed at Holiday Inn in Aylesbury the night before (OKish for £60), taxi to the pub where the race starts. The registration is in the pub and it was a bit crowded and a bit pushy. But quickly done, then outside to drop bag and get timing chip (they use a wrist band system which you pass over the sensor at CPs).
Whilst waiting for the start, had a good chat to the lovely Rob Cowlin, good to catch up with him, he’d also had a crap 2017 race-wise.

The race got started around 0835. First couple of miles were the usual carnage of people flying off way too quickly, the small talk of people trying to outdo one another by regaling stories of obscure races for cool-points, etc.

My strategy for the race was simple – chill the hell out in the first half, not worry about pace at all, get to canal, engage kick-ass mode.

The first half has a few hills and is usually quite muddy, which IMO is good as it forces you to take it slow. Not much I can recall, I just got into my rhythm and next thing I know was at the first CP around 7.5 miles in. The CPs are quite basic (water, gels etc) but that’s fine for a short ultra like this and to be fair, the entrance fee is a good price. I came armed with tons of food anyway so was a case of filling up bottles and moving on.

I mentioned navigation earlier and lack of signage, which, to re-iterate, I think is ludicrous. The best thing to do is run behind someone who knows the course, or someone who is reading the map or following a GPX file. Which is what I did for the whole first half. As they were generally running at a modest pace, this also benefited me by forcing me to hold back a bit.

My gear and ‘nutrition’

What shoes should you use for C2C?

This appears to be asked a lot online – I guess it’s not an obvious one due to the two very different terrains. I think the ideal would be trail in first half, then road in second. However if you don’t have anyone to meet you (bear in mind there’s no drop bag access en route), I think road shoes work fine. Yes, the first half is trail and yes it’s muddy, but trail shoes aren’t going to give you a huge advantage unless you’re in the front of the pack. And once you get to the canal it’s easy going from there.

Second half of race

I’d decided that when I hit the canal, I’d get my MP3 player on and open up the pace a bit. I’m not a great trail runner nor do I do hills well (doesn’t help that where I live there aren’t any). But I knew this half would work for me. Also that so many people would be flagging from going out too quickly.
The other decision I made was – no-one would overtake me from here until the finish. No-one.

There’s pros and cons of running along the canal. The big benefit is that you don’t need to worry about navigation (bar one turning at the ‘Paddington – 13.5 miles’ sign where you turn left). This means you can mentally turn off and just get on with business. Other benefit – with a few short exceptions, it’s winding and twisting – so you’re not seeing the miles and miles you still have left to in the distance.

The downside? It’s not exactly picturesque and frankly, some areas are a complete shithole.

Anyway… what I noticed immediately was how good I felt. No leg pain, no fatigue, no bonks. 7 hours seems a bit of a push but I decided to just think about the present, doing the right thing right now, knowing the result would come eventually. Got some tunes on, and slowly upped the pace.

Pretty much immediately I was overtaking people. So many were looking like shit or down to walking. Amazes me how so many people, even experienced ultra runners, fly out too quick in the first part of races then pay the price later.

I really expected to get some huge bonk but it never came. So I just went with it – sticking with an effort-pace but holding back maybe 10%. The miles started ticking by and I was holding pace well, doing some short walk breaks each half hour, and maybe a 30 sec walk every 15 mins.

Actually, I felt pretty bloody great. The only time during a distance race I’ve felt like this before was during my first ever race, San Francisco Marathon, in 2006.
I’m running and running and just expecting to fall apart and (until the end), it never came. Whoop. In fact, some of my split were as good as:

Had been taking in food every 30mins. Final CP is about 6 miles from finish. Took a gel there. Had mentally calculated I needed to do just over 8 min mile pace to do 7 hours, which seemed doable so I just cracked on.
About three miles from the end my blood sugar crashed out of nowhere so I took another gel. The finish is annoying because it’s just behind a turning into a bridge and there’s no markers before it. And it’s not 45 miles. So unless you know the course or using nav, you wouldn’t know it until you’re on it. So it’s hard to know when to push for the finish.
About 1-2 miles before the end the blood sugar crash was getting to me so I took a quick walk break. My mind started going “chill out, you could just walk this in for a 7hr 5m” but I wasn’t having it!! I vaguely knew from before I was very near, and with no runners visible behind me, kept pushing on.

About 0.5m from the finish I saw another runner in front, but I had nothing in the tank to do a sprint finish, and I think I ended up 10 seconds or so behind him.

I’ve lost my print out and the official results aren’t out yet, but I finished about 8 seconds short of 7 hours.. LOL. Got my medal and sat on the ground feeling very weak from low blood sugar. Kudos to another runner who had to open  my bag of sweets for me and get me a cup of tea!

Got sorted, over to tube and then train home. 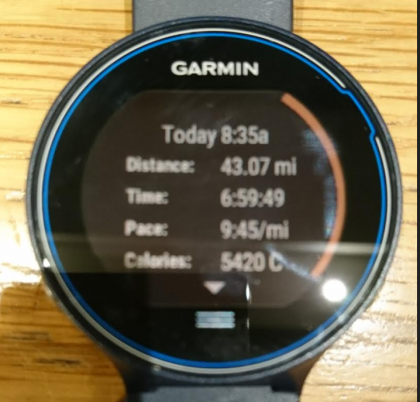 VERY happy with my performance. I paced it well, stuck to my plan and delivered it. And yep, no-one overtook me on the canal!
Finally finishing a race with my head held high was big for me and kicks off a year of racing well. Next stop – NF50 miler in March. Bring it on!!

P.S – would I race C2C again? Probably not – I’ve done it twice and race it really well. The lack of signage in first half puts me off and IMO is pretty silly. It’s a great ultra for winter but not exactly stunning and is one I’ve gained enough of.